I have a special Christmas post just about finished and ready to publish, but first I had to share this conclusion to a post I started writing in…oh my…October. What can I say? I’ve been busy cooking up a baby. If you need a refresher to Part One , click here.

I woke up one morning a couple of weeks ago to the sound of a normally chipper (albeit hungry) household in the throes of a great and raucous mourning.

And it was a mourning that seemed to be spreading with each pitter and each patter of newly awakened feet upon the staircase.

And all of it was gradually mounting in both participation and volume.

My husband opened up our bedroom door and sat gently on the bed beside me, a chagrined look upon his face.

“Well…” he said, “I want to preface this by first saying I am NOT talking about our friend, Zac, but the FISH, Zac…Zac died.”

That husband of mine is a smart man, knowing instinctively that waking up his addle-brained, sleeps-like-the-dead wife with the words “Zac died” would probably send me into a true conniption.

“Oh no…” I croaked, tuning my ear to take in the specific words and lamentations of each of the children who were wailing in the next set of rooms.

Okay, so let me tell you a little something about the Gore children.

Someone…I don’t know who, but someone very morbid and sentimental…might have inordinately passed down a wee little character trait to each of the children in this house that manifests itself quite glowingly on days like this.

And really, I don’t know if I…er, that person…really passed it down to ALL of the children or just to the FIRST child, who then commenced to influence the siblings who have followed behind said first child.

But regardless of  who, what, or how, the Gore children are just insanely loyal to…

well, to pretty much everything.

For instance, to our house (we can never move). To the nursery upstairs (we can never insert a wall up there to divide it into its two intended rooms, never). To the tiny and completely unfunctioning and unused back porch that we will probably cover over when we build on our schoolroom (they sat on it and cried when they heard this news. “This is our favorite part of the entire house!!!” they bawled). To our former minivans (“If the van is going, I’m going with it! I’ll LIVE in it!” one of our more dramatic children wept). To old toys. To broken dishes. To drawings or crafts of any kind. To paper airplanes. To socks. To taco shells. To Frosted Mini-Wheats that are stuck together in interesting ways. To tiny blueberries. To “lucky sausages”. That’s right. I said lucky sausages.

And, most recently, to our new goldfish.

The goldfish that was now floating, dead, in a big jar of water in the kitchen.

“What happened to him??” I asked my husband.

“I told the kids that he died of old age,” he replied. “I mean, that stinking fish lived for two weeks! Who would have guessed that?…”

That much was true. We never thought he would survive the trip home from the fair.

But then he leaned in conspiratorially.

“But if I was really going to name what happened…”

I looked at him, wide-eyed.

You mean this cat? 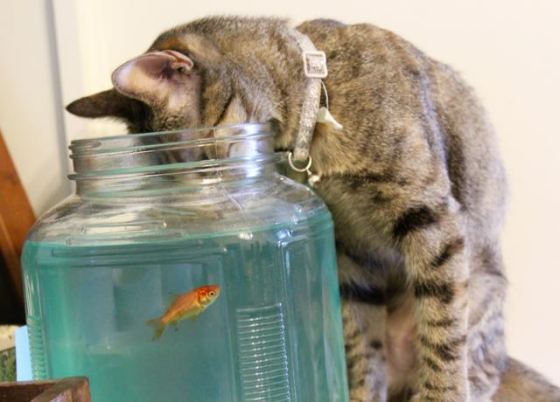 Yeah, that might have had something to do with it.

“I think she tortured him all night and he had a heart attack,” he whispered.

“Oh my…” I replied in matched tones.

What a dismal day at Gore House.

I put on my glasses, waddled to the bathroom, and joined my grieving family as quickly as I could. They initially fell into me, those sobbing children, longing for comfort, but in my arms they simply could not stay; they needed to pace, bless their little hearts, to put motion to their grief, and though it might seem silly to big persons to see these sorts of theatrics…

well, it’s not totally theatrics, is it?

A first taste of loss.

A slap-in-the-face reminder that death is real and that it takes something precious away from us.

this stupid goldfish from the stupid fair!!

But there was also a part of me that understood and that empathized and that throbbed a little at what my little ones were experiencing.

Which leads me to a real topic that I want to discuss today.

I would not consider myself a real animal-loving person, and each of our pets house specific characteristics that absolutely DRIVE ME CRAZY…

but it’s a headache that I have come to believe is completely worthwhile.

Animals and children go together quite well, don’t they? I mean, we have a bottle of “Kids and Pets” stain and odor remover in our laundry room. Because “kids” and “pets” are, without contest, a darling duo.

They’re messy. They’re stinky, without intervention. They are full of energy and playfulness and, in most cases, unconditional love. And, oh yes, we cannot forget their LOYALTY.

Our pets have taught our children, right here in the safety of our home, to look out for the little guy (or the Basset Hound who gets her head stuck in the picket fence). To rescue the perishing (or the tiny and starving kitten hiding out in the neighbor’s engine). To protect the weak (or the bunnies who need extra hay in winter and frozen water bottles in summer). To reward the good deeds of the deserving (or the Golden Retriever who learns and listens to commands).

And, obviously, they’ve taught them to love, till death do them part.

Our kids LOVE their animals. They dote upon them like a mother dotes upon her children. They want to take pictures of them anytime they’re doing something cute or funny. They call themselves “Chloe’s Mama” or “Grace’s Mama” or “Jake’s Papa” (consequently, I am “Chloe’s Grandmother” and Sheppy is “Chloe’s Uncle” and so on and so forth). They rush to see them the minute we walk through the door after being out, even for a short amount of time.

And you know what?

Love that big and pure comes at a cost.

For when it is lost, we feel lost.

And so I didn’t laugh at my kids during Zac’s toilet funeral, and I didn’t tell them to toughen up, even as I secretly rejoiced that we could get that giant fish bowl out of our too-small-for-giant-fish-bowls kitchen.

Which was stupid of me.

I should have known that my “loyal” kids would find a way to keep Zac’s memory alive.

You see, minutes after the conclusions of his funeral, grief still fresh, they replaced him with a plastic goldfish we had in the toy bin.

So now Zac can be with us, in our kitchen, FOREVER. 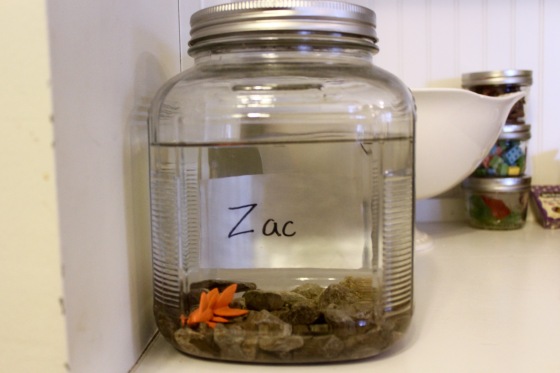 Thank you so much for reading today! If you’d like to hear our stories on an almost-daily basis, follow along on Facebook. And for more photos of plastic fish and childhood antics, join us on Instagram! Now, really, stay tuned for a Christmas story that has my heart all aglow. Coming up, this week!! (and I mean it this time…I think.)

2 thoughts on “Kids and Pets and The Day Zac Died”